ACTIVE INGREDIENTS FROM THE BOREAL FOREST

Strøm offers a range of highly effective skincare treatments developed according to a holistic approach to beauty and wellness. Active ingredients from products emblematic of our region are used to beautify the entire face and body. This wellness ritual finds its essence in the heart of the boreal forest. A moment to stop and take root in this abundant terroir; a break to drop anchor in the here and now.

Timeless, natural, Nordic: these are the three keys around which the line revolves. Seeking to enhance the natural beauty of the body, the products are deeply inspired by nature, which is always found at the heart of the Strøm experience. Black spruce, blue honeysuckle, red maple, jack pine, yellow birch, wild chamomile, and white cedar thus form an integral part of the composition of the products. Let’s explore three star ingredients. 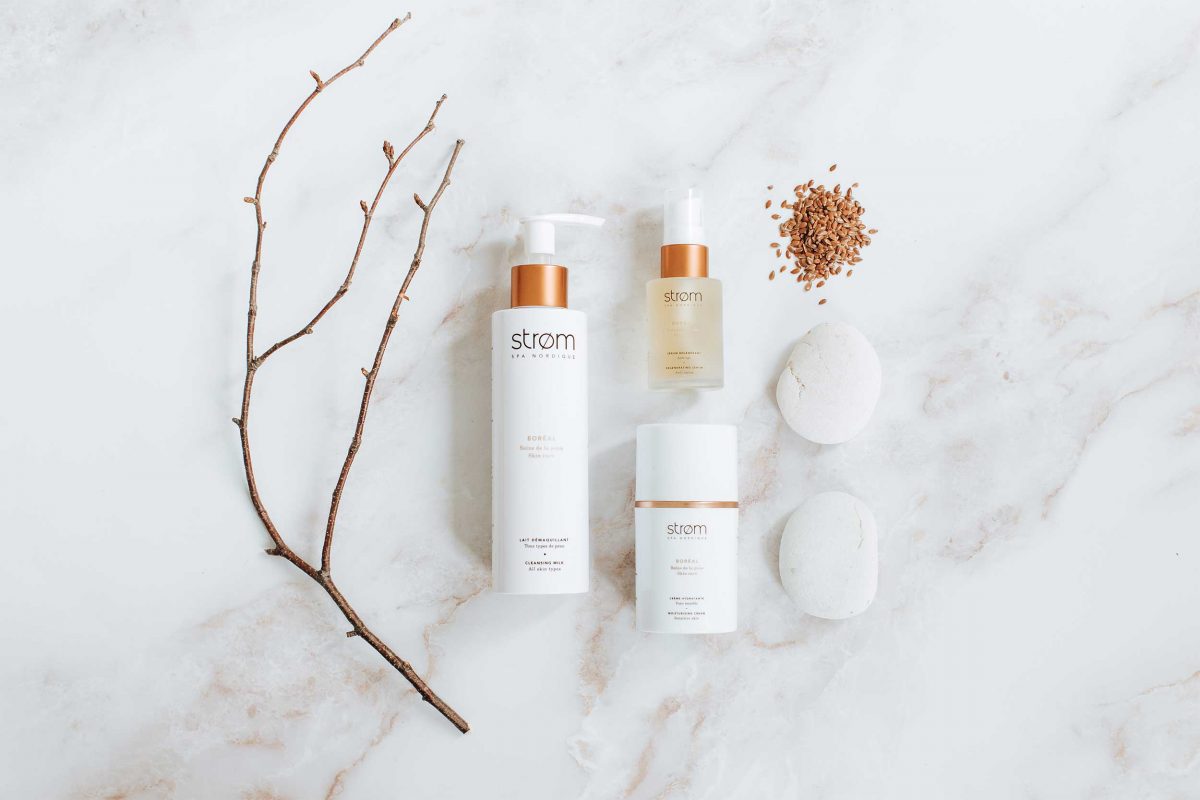 Our boreal muses of the season

Without a doubt, the muse of the Strøm cosmetics line is the Quebec black spruce. Restorative, it helps revitalize the skin and protect it from external aggressions. Soothing and invigorating, it offers a rich fragrance with forest-fresh notes. The black spruce is one of the most common conifers in Canadian forests and one of the most resistant spruce species to the harsh Arctic climate. It is the perfect symbol of the boreal forest.

Ecology: Usually found in the form of vast, uniform stands, it is also associated with the balsam fir, the white spruce, the jack pine, the larch, and the trembling aspen. Stands often appear after forest fires, because the spruce cones open under the effect of heat. The black spruce grows with sun exposure or in partial shade, and it grows slowly, with a lifespan of 200 years. It can be found across Canada, except in the southern Prairies and western British Columbia.

History and symbolism: Social history and local folklore make little mention of this tree species. It is granted neither the poise of the white pine nor the elegance of the sugar maple. Is the black spruce our forgotten treasure? Curiosity toward what is rare probably explains the detachment observed with respect to the most widespread conifer species in the boreal forest. However, the black spruce is the primary symbol of our forests, helping to form ecosystems unique to North America. Exclusive to North American forests, it can be found extensively in Ontario, Quebec, and Newfoundland and Labrador. In Quebec, great black spruce forests cover nearly 28% of the province’s surface area, with a band almost 300 km wide.

Nicknamed the edible honeysuckle, the Quebec blue honeysuckle has only recently been cultivated in North America. Its fruit, the Haskap berry, is a small, oval-shaped berry similar to an elongated blueberry. This shrub can be found in the heart of the boreal forests of Quebec. Due to its soothing, protective, and antioxidant properties, the Haskap berry is used in the composition of products to help delay the signs of premature aging.

Ecology: Lonicera caerulea grows in the northernmost regions of North America’s boreal forests. It can also be found in the boreal forests of Asia, Europe, and Russia. Present in several Canadian provinces, it is harder to find in its wild state, since it is not a dominant species. Known for its resistance to extreme cold, it can contend with Quebec’s northern conditions. Its flowers are resistant to the cold, and the plant itself can survive in temperatures as low as -47°C.

History and symbolism: Goats really like honeysuckle leaves, which is where its Latin name—caprifolium, meaning “goat leaf”—comes from. The Japanese have long considered the blue honeysuckle to be “the fruit of longevity and vision.” Besides containing vitamins A and C and having a high fibre and potassium content, the Haskap berry is known for its antioxidant properties. The blue honeysuckle is popular for its overall health benefits, but also its ability to adapt to extreme cold and the beauty of its foliage, especially during the flowering period. Lonicera caerulea also goes by several other names. Originally nicknamed Haskap, an ancient Japanese name meaning “berry of long life and good vision,” the blue honeysuckle was mostly referred to by the term edible honeysuckle before its most recent appellation, camerise, invented in Quebec in 2006.

Very appreciated as an ornamental tree, the red maple is a tree species from the Aceraceae family, native to eastern Canada. Nicknamed the swamp, water, or soft maple, this tree is the official emblem of Canada and adorns its flag. From the forests of Quebec, it is used in the formulation of Strøm products for its moisturizing properties and its observed benefits for blood circulation.

Ecology: Common in maple forests, the red maple also grows in poorly drained areas that are not suitable for the sugar maple. Tolerant of a range of temperatures and precipitation, it is mainly present in wet soils. It grows with sun exposure or in partial shade and its growth is average, with a lifespan of 100 to 200 years. The Canadian red maple is widespread in southern Quebec and Ontario, as well as in the Maritimes.

History and symbolism: Adored for its flamboyant colours, the red maple has long been of great ornamental interest: while it is embellished with red flowers in the spring, its green summer leaves turn scarlet red in the fall. Its botanical name Acer signifies both “arc” and “hard.” First Nations once used its bark as a pain reliever, in baths for inflammation and in herbal tea to treat coughs and diarrhea. Its pigments were also used to produce cinnamon-, brown-, or black-coloured dyes, as well as in inks. Emblematic of Canada, the maple attracts a variety of birds and small animals that feed on its seeds, branches, shoots, and flowers or use its leaves to build their nests. White-tailed deer and moose are also known to feed on its leaves. 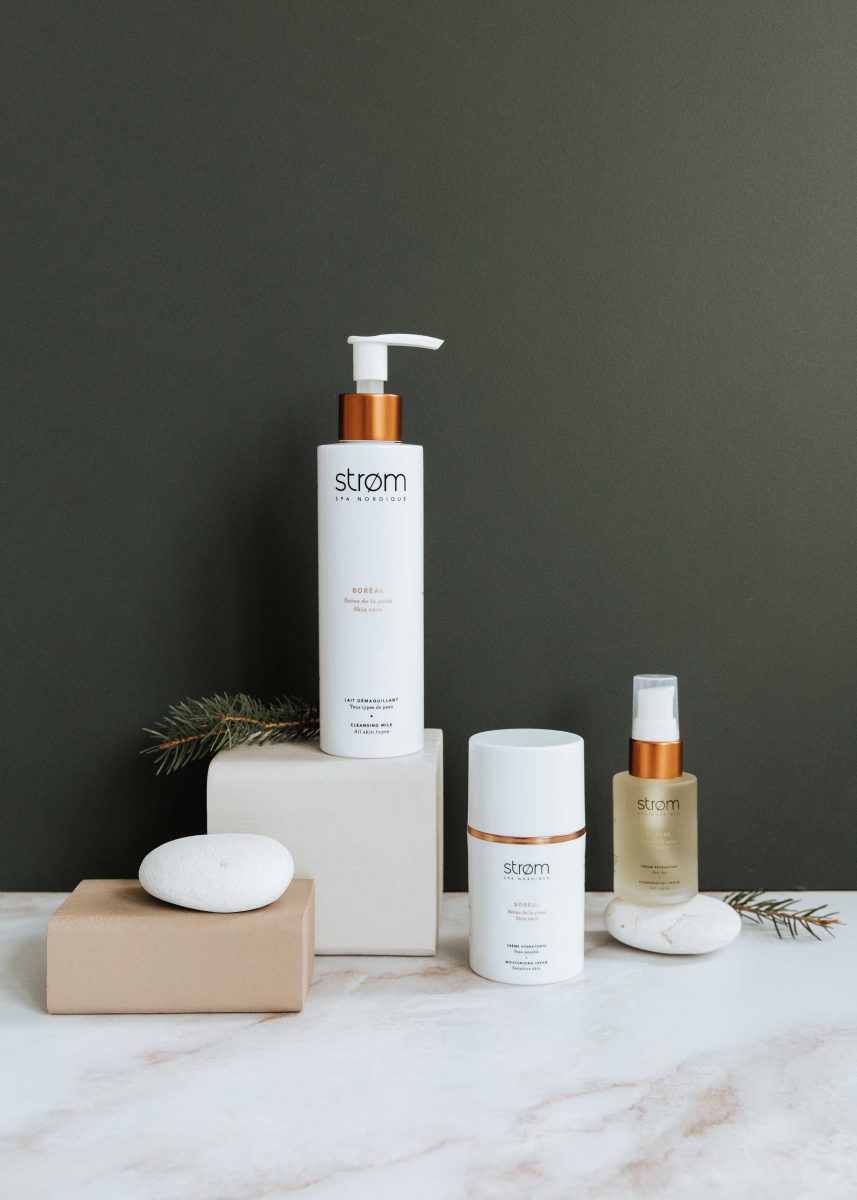 Sublimate What Nature Has Given You | Developing the Strøm Skincare Range

Sublimate What Nature Has Given You | Developing the Strøm Skincare Range

IDEATION – Julie Morin, General Manager of Strøm spa nordique de Mont-Saint-Hilaire, is leading the creation of the Strøm line of aesthetic products, which will be launched in the spring of 2020. The result of collaboration with a Montreal laboratory, this range will allow people to bring part of the Strøm experience home. Natural. Timeless. […]

The essential steps for a face treatment at home

The essential steps for a face treatment at home

To get your skin looking fresh and ready for summer, Patricia Faucher, Beauty Chef at Strøm Nuns’ Island, explains how to achieve a face treatment at home which will feel good and do good to your skin. Enjoy! See the video Step 1: The cleansing It is important to cleanse your skin daily, preferably in […]