Throughout my pregnancy, people told me: “You’re going to give birth later than expected, it’s your first one”. I had even organized my plans around the fact that Charles William, my little boy, would be arriving later than March 2, my estimated due date. I had mentally chosen the full moon of March 9. I was visualizing. I kept working. I didn’t feel the need to pack my hospital bag. Of course, I quickly learned that you have absolutely no control over that! My son was born earlier than expected. I came home late one night after work and my water broke during the night. He had chosen the new moon at the end of February instead… 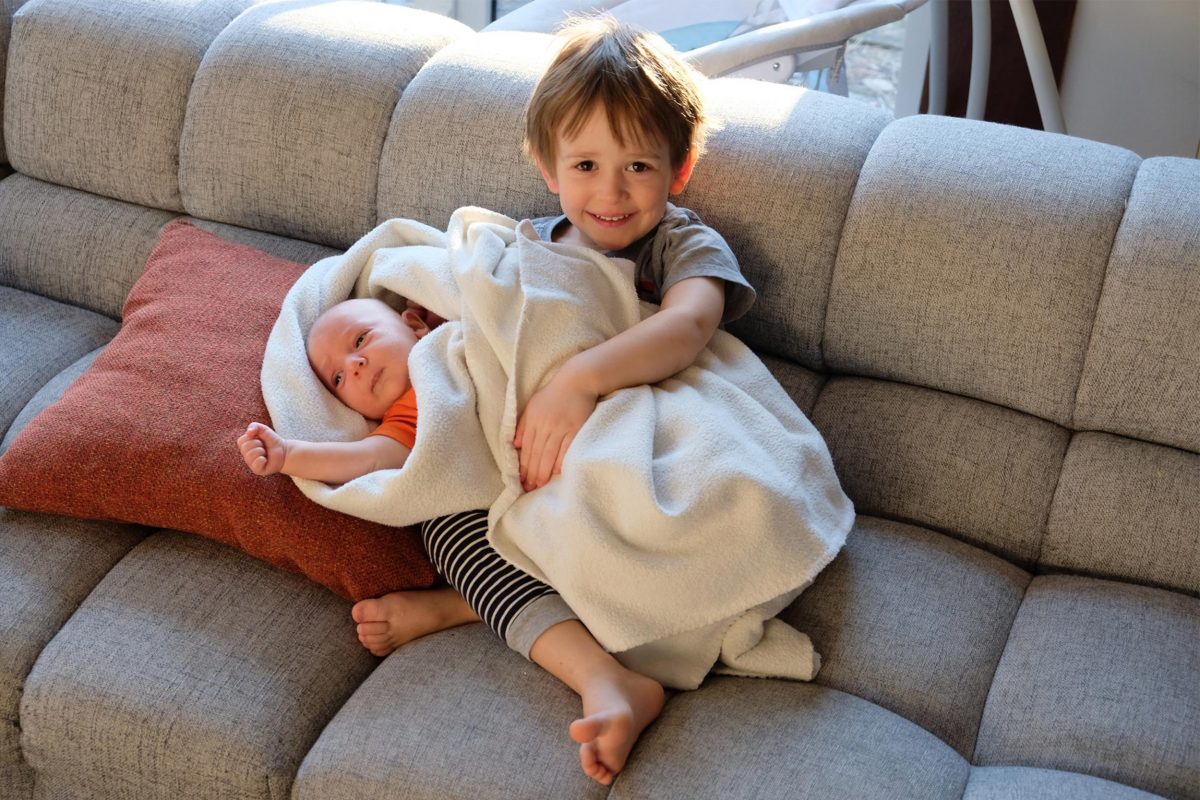 He couldn’t wait to get out. Maybe he felt something big was coming and it was better to be home. The first two weeks of his life were normal and sweet. Charles William met his half-brothers and his half-sister, who were eager to see him and who approached him with fascination. He was rocked by his grandparents who were completely dotty about him, and moved as only those who have seen and lived a lot can be. Then, without really understanding the seriousness of it, we began to hear about the virus. Events unfolded quickly. Schools, spas and other facilities were closed… My maternity leave was going to be different than I had imagined.

The small and not-so-small griefs have followed one another. I had to let go of the idea of going for brunch with other moms, to cancel the appointments at the osteopath for the baby’s well-being, and to postpone the moments spent with grandma and grandpa. Our families see Charles William growing up, awakening to the world at an extraordinary pace, through screens. When I stop and think about the situation, my heart tightens. That’s how I realize that this grief is somehow wonderful. There is beauty in sadness, as it reflects the love and gratitude one bears for what one has lost. We miss human contact. It makes us realize how deep and rich our ties are.

Becoming a parent means getting back to basics. It means realizing that all that matters is the well-being of those you love. It’s about being protective. Our animal instincts are increased tenfold. This confinement in our family unit allows us to create a cocoon to welcome the new member of our clan. An aura of oxytocin emanates, and we become one.

Becoming a mother also means better understanding the cycles of life… Children are living proof that life is continually reinventing itself. They are the hope of tomorrow.

I will remember the spring of 2020 as the most beautiful period of my life, when I became a mother in the most unlikely of circumstances…

Understanding our collective feelings by exploring the stages of grief

Understanding our collective feelings by exploring the stages of grief

Photo credit: Aurianne d’Aon In my case, isolation related to COVID-19 happened as I was moving into the house I had just bought with my boyfriend. It is in the middle of the boxes and furniture to be assembled that I started seeing my clients by video conference for psychotherapy sessions, that I taught classes […]

Letting go, slowing down and simple pleasures | a new life at home

Letting go, slowing down and simple pleasures | a new life at home

A VISIT AT GABRIELLE’S – Gabrielle joined the Strøm team under very special circumstances. She has been helping the whole team for a few weeks now during this time of great change. Her husband being a doctor and having a young daughter at home, her story is about the importance of letting go, helping each […]

AN INCURSION IN RAPHAËL’S DAILY LIFE – Raphaël has been the executive chef of Nord restaurants and Fika café for the past two years. As the father of four wonderful children, he takes advantage of the confinement to reconnect with simple pleasures in his home in the countryside. A time to combine teleworking and family […]

What do I do now?

What do I do now?

A testimony? Who am I? Everything we experience is so personal. This confinement is individual before it is collective. The saying “it all comes from within” takes on its full meaning at this time. I think that the murmurs of our unconscious reappear in a brutal way when our freedom is being put to the […]

April 15th, 2020 by Marie-Eve Trudel, founder of Yogacamp retreats, of Namkha studio and media strategist for Strøm through her agency, Comptoir Pub

The idea of confinement slowly made its way into our house before it turned everything upside down. Since I live very close to my mother’s house, we had kept seeing each other at first. When it was beautiful outside we would take walks with my son, and we would meet at the park to look […]

Visiting Bianca – Bianca has been the official photographer at Strøm for six years now. Her images make us travel and discover the delicacy of the present moment. In this time of isolation, she invites us into her world, giving us ideas to brighten our confinement through photography. Just like a wave that hit us […]

My job is one of proximity, human warmth and sharing with the public. If I am a film journalist and, thanks to Strøm Magazine, a literary columnist, I am first and foremost a theatre artist. The artistic community was among the first to suffer the wave of cancellations and closures linked to the ban on […]

Being overseas in times of confinement and great change

Being overseas in times of confinement and great change

VÉRONIQUE’S STORY – Véronique has been the artistic director of Strøm Nordic Spa since 2013. But for four years now, we have been working with her at a distance since she moved to Austria to be with her great love. This story from overseas tells the beginning of a whole new chapter for the mother-to-be […]

Redoubling efforts in times of crisis | the life of a caregiver

Redoubling efforts in times of crisis | the life of a caregiver

GUIDED BY LOVE Jacqueline is a caregiver for her daughter Véronique, 30, who has Angelman syndrome, and for her mother, Madeleine, 95. All three women and Jacqueline’s husband currently live under the same roof. As Strøm supports the cause of caregivers, we wanted to discuss her new reality with her. What does being a caregiver […]