TIME FLIES — In our relentless race against time, literature stands out as one of the best ways to escape, embrace, slow, rewind or confront it. Certain images make you pause to savour the moment. 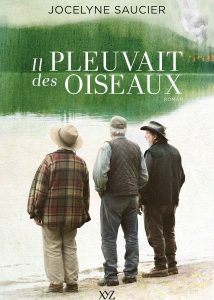 AND THE BIRDS RAINED DOWN

Inspired by the deadliest wildfires in Canadian history, which raged in northern Ontario in 1916, this beautiful story—told in many voices by writer Jocelyne Saucier— is shrouded in an atmosphere of chiaroscuro despite the haunting memories of the flames. Three “freedom-loving” men live as hermits in a forest that has reasserted itself. However, their tranquility is disturbed by the investigation of a photographer who, too curious about the past of one of their own, disturbs the “death pact that adds some spice to life.” You’ll savour an enigmatic, delicate writing inhabited by imposing figures like the pain of old wounds. In September, the work was reborn in the cinematic adaptation by director Louise Archambault (Gabrielle, Trop), who directed a starstudded cast including Rémy Girard, Andrée Lachapelle and Eve Landry. A timeless story to (re)discover. 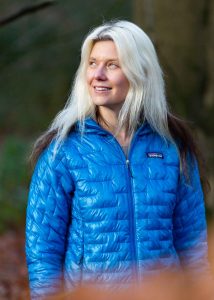 Are you waging war against insomnia? Have you also always wanted to board the Orient Express or probe the mysteries of Moroccan forests? If so, author Phoebe Smith is definitely the writer for you. A world traveller focused on the world’s eternal mysteries, this Brit is the leader of the slow literature movement, which doesn’t try to captivate you until the last page but helps you drift off to sleep. Yes, you read that right! Phoebe Smith, deemed the J.K. Rowling of the movement, uses her travel diaries in Sweden, Nepal and Madagascar to lead us down meditative journeys in collaboration with the Calm app and her Sleep Stories series. The most popular story, “Blue Gold,” is actually narrated by actor Stephen Fry, the narrator of—you guessed it—the Harry Potter audiobooks. His enchanting voice quickly turns soft beds into the lavender fields of Provence. blog.calm.com

When was the last time you listened to an album in order, from the first to the last song, without interruption? Still wielding his guitar and his enveloping melodies, Michel Rivard “comes up to the foot of the twentieth century,” since “it’s tempting to test time/ to feel the old days/ to stretch time along the clothesline in Marquette Alley.” In this book/CD based on the eponymous show, which has been travelling throughout Quebec since the spring with great success, the singer-songwriter has given us the gift of ten new songs and has opened up about his life with self-deprecating subtlety. As the title suggests, it traces his journey with his “melancholy mom” and his father with “the voice of an actor/ who rarely spoke.” Little Michel wonders about the “accident of love” between them. He is a gifted storyteller—and a revelation even after all these years. Excerpt read and sung by Michel Rivard: icimusique.ca 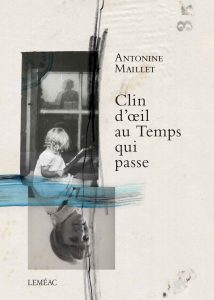 Beau Dommage isn’t the only one looking in the rear-view mirror. The creator of La Sagouine, the irresistible Antonine Maillet, has boldly invited us into “the waltz in three-quarter time” of her life and to those milestones that we all will pass: “dawn, daylight and dusk.” With “fleeing, capricious, elusive” Time as the sole character, the famous Acadian expresses herself with relentless precision while recounting the lie of the writer in the making, her compassion for Anne Frank (who, like the author, was born in 1929) and her attraction to the margins of existence. An incorrigible dreamer, who writes “like other people breathe,” makes Évangeline, Pélagie-la-Charrette, President Mitterrand and her beloved Mecha come alive during historical or fictional interludes, public performances and offerings of scenes from her private life. A timeless gift for yourself. 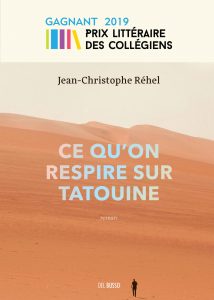 The first novel of a poet praised many times over for his unique voice and disarming humour (Les volcans sentent la coconut, La fatigue des fruits), Ce qu’on respire sur Tatouine introduces us to the author’s alter ego, who, like him, is suffering from cystic fibrosis—but the comparisons stop there. Star Wars fans, hold on before pointing out an unforgivable spelling blunder. Although the anti-hero in question also has an obsession with George Lucas’s franchise and therefore with Tatooine, the desert planet where the Skywalker family originates, he prefers to invent a new one, which is “almost like the real one but just different enough,” to better endure his shifts at a Super C or late-night texts from Amidala, his budding love interest. An ode to the imagination as a bulwark against gloom that plays with the stereotype of the star-crossed poet with an infectious pleasure, this striking book is the most recent winner of the Prix littéraire des collégiens. And he certainly earned it. Excerpt from the novel read by Emmanuel Schwartz facebook.com/jcrehel

An invigorating evolution is occurring in authors – newcomers and seasoned writers alike – who dare to leave their comfort zone and look elsewhere for inspiration. And found it. The solitude of prime numbers, by Paolo Giordano (Pamela Dorman Books, 2010, originally published in 2008 as La solitudine dei numeri primi) Ten years after this […]

If you feel like you’ve lost your True North, now is the time to adjust your compass toward Northern Quebec. Like it or not, our geographical position influences entire parts of our lives. Be it wrapped up radiographs or as the bird flies. Mingan mon village, by Rogé and Innu schoolchildren (Les Éditions de la […]